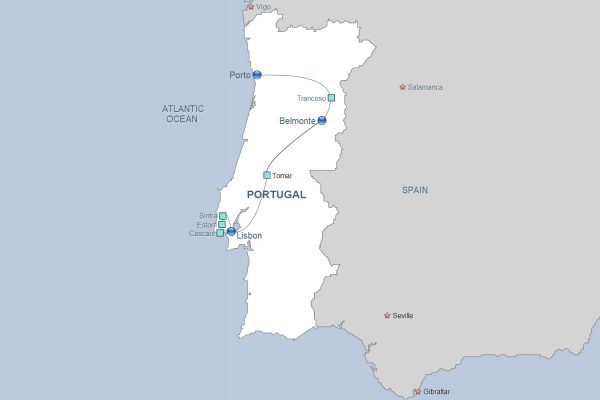 Tour of Jewish Portugal: Following in the Footsteps of Portugal’s Secret Jews
The Jewish presence in Iberia has existed long before Portugal itself became a country.  The contribution of Portuguese Jews to the arts, philosophy, commerce and sciences helped create the rich cultural heritage of this nation. Our unique tour focuses on places of Jewish interest, as well as the fascinating people who continue to contribute to Portuguese society. These descendants of the Inquisition often referred to as Marranos are now known as the B’nai Anousim (Children of Oppression). Forced to convert during those awful days, many secretly and over the centuries retained their precious Jewish practices as well as pride in their true heritage. These are the Secret Jews of Portugal – proof, to this day, that our people’s soul cannot be vanquished. Staying at gorgeous hotels you will enjoy both physical luxury and a rare inimitable Jewish experience.

These departures are guaranteed (4 travelers minimum)

Your land arrangements include:
Private arrival and departure transfers
Private touring and sightseeing
Local guides with 5 or less travelers
Full time Tour Director with 6 or more travelers
Complete program with insights into the Jewish history of Portugal
Private licensed guides
Deluxe hotel in Porto and Lisbon
First Class hotel in Belmonte
Breakfast daily at the hotels

Your land arrangements do not include:
Round trip airfare to and from Portugal
Departure taxes/fuel surcharges or airport improvement fees subject to change without prior notice
Insurance – non-refundable insurance premium
Documentation including passport fees
Early check-in and late checkout
Single room supplement – a limited number of single rooms is available on payment of supplement
Meals not mentioned
Beverages not specified
Entrance fees are not included
Porterage is not included
Optional tours not quoted
Mandatory city taxes are not included and have to be paid by the passengers directly to the hotel
Gratuities for individual services such as laundry and valet service or any other items of a purely personal nature
Tips to drivers/local guides/hotel and restaurant staff – tipping is at the discretion of the traveler
E. & O.E.

Complete program with insights to the Jewish history of Portugal
These departures are guaranteed (2 travelers minimum)
No deposits are required!

Pre/Post Tours
We can accommodate pre/post tour arrangements in conjunction with this tour.

Passport & Visa
No visa is required for travel to Portugal. Always make sure your passport is valid for at least 6 months after the tour ends.

Private transfer to your hotel in the heart of the capital of northern Portugal beautifully located above the River Douro. In the afternoon enjoy a walking tour in the old quarter or Baixa declared a World Heritage Site by UNESCO in 1996. Descend to the Ribeira area where the characteristic stone quays are beautifully restored. Porto was well known amongst the Jewish traders during the Middle Ages and today its Jewish Quarter remains. You will see both the “Rua Monte Judeus” and  the “Escadas da Esnoga” (which mean “Street of the Jewish Hill” and “Stairway to the Synagogue”) as well as a panoramic view of the Dona Maria Bridge (designed by the famous Gustave Eiffel). Besides it historic aspects, Porto is also a contemporary and artistic city. This is visible everywhere in the streets, architecture, art galleries and museums and also in the restaurants and boutiques the city offers.  PortoBay Flores Hotel.

This morning visit the Makor Haim Synagogue (“Source of Life”). With help from abroad in the early 20th century, this was the first synagogue built in Portugal for native Portuguese Jews in over 400 years. Captain Barros Bastos also known as “Ben Rosh,” pushed the construction to assist the many Crypto-Jews returning to the open practice of Judaism. While discovering Porto you will find many surprises. Besides its welcoming yet rather conservative atmosphere and look, Porto is also a very much contemporary and artistic city. This is visible a bit everywhere, in the streets, architecture, art galleries and museums but also in the terraces, restaurants and all the leisure and shopping facilities the city has to offer. The remainder of the day at leisure.  PortoBay Flores Hotel. (B)

Drive to Trancoso, a well-preserved sample of a Portugese walled town. The Jewish presence in Trancoso dates back to the 12th century. In the Medieval era Jews prospered in the middle and upper classes. The Jewish and “New Christian” legacy still lives in the written documents, local traditions and in buildings such as the Gato Preto House or Poço do Mestre (Master’s well) and other dwellings of the historic center. The town of Trancoso has honoured its Jewish heritage with the establishment of the Isaac Cardoso Center for Jewish Interpretation along with a new synagogue called Beit Mayim Hayim – “the House of Living Waters.” A mezuzah was affixed to the entrance of the synagogue – the first mezuzah in the village for hundreds of years!  Continue to Belmonte crowned by the medieval castle. Belmonte stands out for the beauty of its landscapes and monuments for its fabulous strategic position which has made it dominate, from immemorial times, territories and communication routes. To its credit, Belmonte also welcomed people of other creeds and cultures.

A Jewish community was established that has survived for centuries. It still exists today – heir to the ancient historical presence of the Sephardic Jews. Even throughout the time of the Inquisition, Jews managed to preserve many of their rites, prayers and social relations. Despite the pressure of the Catholics, many “New Christians” continued to marry only among themselves for centuries. In 1989, the community was officially recognized and in 1996, it inaugurated the synagogue “Beit Eliahu” (Elijah’s House), appropriately located in the old Jewish Quarter. The Jewish Cemetery was restored in 2001 and in 2005, the Jewish Museum opened, portraying the history of the Sephardic presence in Portugal and including a memorial of the Inquisition. Since 2011, Belmonte has also hosted the “Portuguese Network of Jewish Quarters.”  This Community consists of twenty-five families, all descendants of the “Secret Jews” who perpetuated their religion against all odds for centuries. In Belmonte’s old Jewish Quarter, we can observe small houses with crosses engraved on them – a protective pretence by Jewish people to escape persecution. Mt. Sinai Hotel. (B)

Begin this day with a visit to the Jewish Museum portraying the history of the Sephardic presence in Portugal including a memorial of the Inquisition. Since 2011, Belmonte has also hosted the “Portuguese Network of Jewish Quarters”.  Later depart for Lisbon. En route, visit Tomar, one of the oldest and most charming towns in Portugal founded by the Order of Knights Templar. Visit the 15th Century Synagogue now the Museum Luso-Hebraico Abraão Zacuto located on what was once Rua da Judiaria. Here you will find a significant reminder of one of the greatest Sephardic Jewish communities now classified as a national monument. With Gothic vaults upheld by four central columns, this structure houses Jewish gravestones, the cornerstones of the 13th Century Synagogue of Belmonte and the 14th Century Lisbon Synagogue and other remains of Tomar’s medieval Jewish community. Arrive in Lisbon in the later afternoon. PortoBay Liberdade Hotel. (B)

In the morning visit the Shaare Tikva Synagogue restored in 2004. Continue your panoramic visit in Lisbon to the Riverside area.  Passing the Rossio we reach the Largo da Graça from where you can admire the magnificent city view, the Tagus River and the “Seven Hills” of Lisbon. Continue to Porta do Sol descending on foot through the Alfama, Lisbon’s oldest area to the “Rua da Judiaria” the old Jewish Quarter with its narrow, cobbled streets. You will also stand in the Praça do Comércio where the dreaded “Autos-de-Fé” of the Inquisition took place.

Later see the Belém-Mosteiro dos Jerónimos, a UNESCO World Heritage Site, one of the most representative monuments of Manueline style in Portugal. View the Monument to the Discoveries which owes much to the Portuguese Jews and “New-Christians” as many forced converts were called. From Torre de Belém guarding the mouth of the Tagus River, explorers once set out on voyages to discover trade routes to Africa, Asia and the New World. (Brazil, of course, is the most famous product of these journeys.) See the striking, Padrão dos Descobrimentos monument which celebrates the Portuguese adventurers who took part in the Golden Age of Discovery. Return to the hotel in the afternoon. PortoBay Liberdade Hotel. (B)

Depart on a full day excursion to Estoril and Sintra, a World Heritage Site also known as “Lord Byron’s Glorious Eden.” Sintra was used as a retreat by the Romans, the Moors, and the Portuguese Kings, all of whom revelled in its location, beauty, wooded ravines and natural water springs. Its former Jewish Quarter where Jews lived and mixed at the Court before the forced conversions of 1497 is still visible today. Visit the glorious National Royal Palace. En route back to Lisbon, stop at Cascais once an important 14th century Jewish community which also played in part in Jewish refugee life during the Holocaust.  Aware of the significance of its Jewish Heritage, the Cascais Municipality opened the Espaço do Exilio Estoril (Exiles Memorial Center) to preserve this memory. Return to Lisbon. PortoBay Liberdade Hotel. (B)

Transfer to the airport (pending the time of your flight departure). (B)