Combined In the Footsteps of Jesus Tour, 10 days / 9 nights 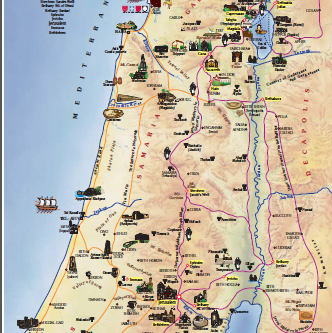 This 10 day tour takes you on an incredible journey following the Footsteps of Jesus from Bethlehem to the Via Dolorosa. This spiritual journey will enrich your soul. You will see places of historical and architectural interest as well as having the opportunity to be baptized in the Jordan River.

Visit places in the Bible that you only dreamed of. This itinerary is recommended for wheelchair and scooter users, slow walkers, visually and hearing impaired travelers.

On arrival at Ben Gurion International Airport, your driver will be waiting to provide the transfer to your hotel for dinner and overnight.

A morning drive up the coast to the Caesarea National Park to see the remains of the former Roman capital home of Philip the Evangelist and where Paul was imprisoned and appeared before Festus, Felix and King Agrippa. Visit the Roman Theater, the Hippodrome and promenade leading to the renovated Crusader city.

Don’t miss the “Caesarea Experience,” a fascinating computerized presentation about the city’s history. Continue on to Muhraka on Mt. Carmel, the traditional site of Elijah’s confrontation with the prophets of Ba’al and the Carmelite Monastery of St. Elijah. Crossing the beautiful Galilee Mountains, we stop for an overview of the Sea of Galilee in the late afternoon.

Dinner and overnight in Tiberias.

Begin in Tabgha where Jesus challenged His disciples to feed a crowd of 5000 at the Multiplication of Loaves and Fishes. See the Church of the Primacy of St. Peter and the Mount of the Beatitudes, where Jesus delivered the famous Sermon on the Mount. Drive north stopping at Tel Dan, an important site in Biblical times.

Travel to the magnificent waterfalls of Banias (Caesarea Philippi) where Jesus called Peter “the Rock” and promised him the keys of the Kingdom. Opportunities for Baptism and renewal of vows possible at the River Jordan.

Dinner and overnight in Tiberias.

This morning we head to Cana where Jesus performed the first of His miracles. Continue to Nazareth known as the Cradle of Christianity where Jesus spent his youth visiting Joseph’s Workshop and Mary’s Well before driving along the Jezreel Valley to Tel Megiddo where you will see the little village of Naim where Jesus raised the son of the poor widow from the dead. Continue by minivan to the top of Mt. Tabor to visit the Church of the Transfiguration.

Return to Tiberias for dinner  and overnight.

Journey to the ancient city of Samaria, capital of the Kingdom of Israel in 9th and 8th century. Travel along the Jordan Valley to Jericho, the oldest continuously inhabited city in the world where more than 20 successive settlements have been unearthed by archaeologists. Continue to the Holy City of Jerusalem.

Southwest of Jerusalem is the village of Ein Karem, home of Elizabeth, wife of Zacharia. Proceed to Yad Vashem, the moving and somber Memorial dedicated to the Jewish Victims of the Holocaust.

Next is the Israel Museum, Israel’s national museum founded in 1965 located on a hill in Givat Ram housing the famous Dead Sea Scrolls discovered in 1947 by a Bedouin Shepherd in a cave in Qumran.  Afterwards travel to Bethlehem believed to be the birthplace of Jesus to visit the Church of the Nativity, one of Bethlehem’s major attractions.

Drive to the Mount of Olives, a major Christian pilgrimage site. In the Old City stop at the  Upper Room, (known as the Cenacle or Room of the Last Supper) believed to be the site where Jesus celebrated the Last Supper with His Disciples. Visit the Davidson Center, one of the most significant archaeological sites in the country and continue to the Western Wall of the Temple Mount. See the El Aksa Mosque, the third holiest site in Islam and the Dome of the Rock, a shrine located on the Temple Mount believed to be the site of the Islamic miracle of the Isra and Miraj.

Next is the Herodian Estates. Retrace Jesus’ last steps before His Crucifixion as you walk down the Via Dolorosa (Way of Grief) marked by Nine Stations of the Cross to the Church of the Holy Sepulchre, a pilgrimage center for Christians all around the world.

Leaving Jerusalem head for the Wilderness of Judea. Continue to Masada, the isolated mountaintop fortress of King Herod and the last Jewish stronghold against the Roman invaders where over 980 zealots chose to commit mass suicide rather than being enslaved by the Romans. The dramatic ending of Masada is one of the Jewish people’s greatest examples of determination.

Ascend by cable car to view the remains of Herod the Great’s palaces, store house complex, bath houses, fortress and synagogue. Head to the Dead Sea with an opportunity to float in the unsinkable waters. Later on visit Qumran where the famous Dead Sea Scrolls were found in a cave in 1947 by a Bedouin shepherd. En route to Jerusalem we stop at the Inn of the Good Samaritan used as a hostel along the ancient road from Jericho to Jerusalem.

On the way, overlook the Trappist Monastery of the Silent Monks at Latrun and the Ayalon Valley where  Joshua made the sun stand still. Then it’s on to Jaffa, the ancient seaport mentioned in the Biblical narrative of Jonah and the whale and in the story of Solomon who imported the cedars of Lebanon. See Jaffa’s fishing port, St. Peter’s Church, the artist’s quarter, the Visitor’s Center and a panoramic view of Tel Aviv.

Returning to Tel Aviv stop at Bet Hatfutsot, the Museum of the Jewish People. On Tuesdays and Fridays you can enjoy the crafts market on Nahalat Binyamin Street or the nearby open-air Carmel fruit and vegetable market which is open daily and provides a colorful opportunity to mingle with the locals.

This evening enjoy a farewell dinner in Tel Aviv.

Transfer to the airport for your flight home or extend your stay in Israel.