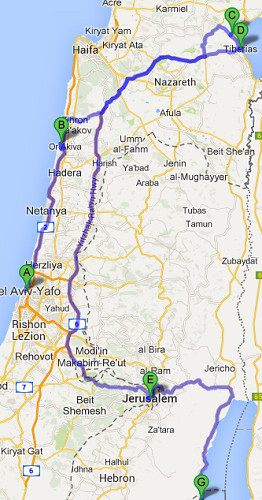 This 6 night Combined Jewish tour starts off in Tel Aviv and takes you on a journey through time visiting some of the top sights in Israel. You will be moved by special visits to the Kotel and Yad Vashem. Walk back in history as you discover the ruins of the Crusader Town of Caesarea and Beit She’an.

Hold your breath on the exhilarating cable car ride up Masada and explore the amazing fortress that King Herod built.  This itinerary is recommended for wheelchair and scooter users, slow walkers, visually and hearing impaired travelers.

*6 days of touring as per the itinerary

Drive from Ben-Gurion International Airport to the ancient port city of Jaffa famous for its affiliation with the Biblical stories of Jonah, who set out from Jaffa before being swallowed by the whale and Solomon, who imported cedars from Lebanon to Jaffa for the construction of the first temple in Jerusalem. Enjoy an evening seaside walk at the Tel Aviv Port, with its galleries, restaurants and coffee shops.

Travel up the coast to Caesarea where King Herod built a large port 2000 years ago honoring Emperor Augustus. Visit the Roman Theater, Herod’s palace, the walled Crusader town with its galleries and Caesarea’s latest attraction, the Time Trek, a fascinating multimedia presentation. Continue across the Carmel range to the Nahal Hashofet Nature Reserve to enjoy the water and greenery of the Menashe region located in the foothills of Mount Carmel. Drive to the Sea of Galilee area and stroll along the waterfront in the resort city of Tiberias.

Tour the ancient village of Magdala where a synagogue from the Second Temple period was discovered in 2009. Continue to Kibbutz Nof Ginosar where the “Jesus Boat” dating from the 1st century C.E. is on display. Returning to Tiberias pass the grave of Maimonides known as Rambam considered to be one of the most important Jewish pilgrimage sites in Israel. Walk along the promenade and stop for lunch (on your own). Continue to Kibbutz Degania Aleph, Israel’s oldest kibbutz founded in 1909 located at the southern end of the Kinneret to hear about kibbutz life then and now.

Begin at the old Kibbutz Gesher where you learn about the ideals, perseverance and history of the Kibbutz Movement. Travel south to Beit She’an once known as Scythopolis with its Acropolis, Temple,  Roman bathhouses, theatre, amphitheater and Samaritan Synagogue excavated in 1960.

Drive via the Jordan Valley to Jerusalem approaching in the late afternoon. Stop at the Mt. of Olives Observation Point for a visual and spiritual introduction to the city. View the Temple Mount, the City of David, the Church of the Holy Sepulchre and more as the vista spans the length and breadth of the city.

Spend time at the Western Wall also known as the Wailing Wall or Kotel, one of the last vestiges of the Second Temple complex built by Herod some 2,000 years ago and thus the holiest spot in the world for Jews. Excavations in Jerusalem’s Jewish Quarter have revealed a wealth of finds from the First and Second Temple periods.

Ascend by cable car to the isolated mountaintop fortress of Masada where 980 Jewish zealots chose to commit mass suicide rather than be enslaved by the Romans. The new museum at the Visitor Center reveals the secrets of the daily life of the rebels, the story of the excavations and how the site became one of Israel’s most important symbols.

Stop at one of the Dead Sea spas or beaches for a dip in the saltiest sea in the world. Visit the Ein Gedi Botanical Gardens located on the grounds of Kibbutz Ein Gedi where hundreds of trees and plants from exotic places around the world flourish in their oasis surroundings.

Time permitting visit the Israel Museum which houses what is considered by many to be the most important archaeological discovery of the 20th century, the famous Dead Sea Scrolls. Its unique white dome recreating the lids of the jars in which the first scrolls were found.

See the famous Model of the Second Temple of Jerusalem recreated on a scale of 50:1 followed by an audiovisual presentation about life in the tumultuous days of the Second Temple. Then drive to Ben Gurion International Airport for your flight home or extend your stay.