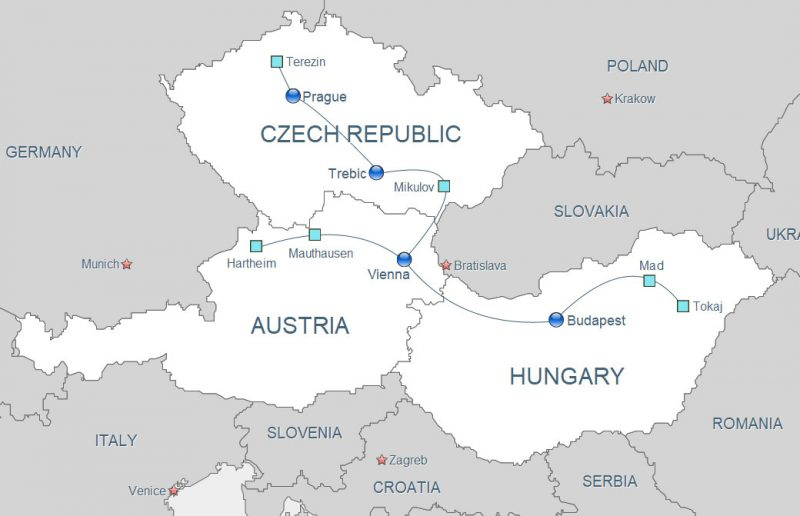 These departures are guaranteed (4 travelers minimum).

Your land cost includes:
Private arrival / departure transfers
Private touring and sightseeing
Deluxe Hotels in Budapest, Vienna and Prague
First Class Hotel in Třebíč
Breakfast daily at the hotels
Complete program with insights to the Jewish history of Central including extended visits in Hungary, Austria and the Czech Republic
All taxes and fees

Your land cost doesn’t include:

Welcome to Hungary! Upon arrival, transfer to the hotel in the heart of the grand city that houses the largest Jewish Community in Central Europe. Get a first introduction to this majestic place during an orientation tour of Buda, including views from the Castle Hill, where emperors of the Austro-Hungarian Empire once ruled one of Europe’s most powerful entities. Pass the Royal Palace and the ornate St. Matthias Church, entering Fisherman’s Bastion and the Citadel for spectacular views of some of Budapest’s famous buildings (including the Parliament Building). En route back to Pest, visit the Medieval Jewish Prayer House, a 14th century synagogue that was recently rededicated. Stop at the Raoul Wallenberg Memorial, commemorating the heroic Swedish diplomat who rescued thousands of Jews. Check-in at your luxurious hotel in the heart of the city. Remainder of the day at leisure. Prestige Hotel.

This morning, discover the Jewish sites of Budapest. Visit the birthplace of Theodore Herzl, the Jewish Museum, and the lavish Dohany Synagogue, where Liszt used to play the organ. Continue to the Weeping Willow Memorial Tree, dedicated to the 600,000 Hungarian Jews who perished in the Holocaust. Next, walk in the former Jewish area, still filled with several Synagogues (Including Kazincy and Rumbach) and small shtiebls. Later, drive pass the impressive Opera House and Parliament, en route to the moving “Shoes by the Danube” Memorial. In the afternoon, visit Szentendre, a quiet and colorful Baroque town, that since the past century has attracted artists from all over Central Europe. A special treat here is a visit to the Szanto Synagogue, believed to be the smallest synagogue in the world. Return to Budapest in the late afternoon. Prestige Hotel. (B)

Enjoy a day at leisure or explore a less visited part of Hungary with a rich Jewish heritage — Tokaj. In the 17th century, Polish Jews arrived here and began producing dessert wines – still known and loved as “Tokay.” Stop in Miskolc, meeting with members of the Jewish community in the Kazinczy Street Synagogue. Continue to Mád, starting point for the “Footsteps of the Wonder Rabbis” Pilgrimage. The restored Mád Synagogue and Rabbinical House stand as a paragon of Hungarian baroque synagogue architecture. Later, follow the pilgrims’ route to Bodrogkeresztúr. Each year, thousands come here for the Yahrzeit of Reb Shaya’le of Kerestir, “the Miracle Rabbi.” Visit the Ohel of Reb Shaya’le, and pay respects at the Holocaust Memorial, before continuing to the Wine Museum in Tokaj and a tasting at a local vineyard –  including local Kosher wine. After a day of remarkable impressions, return to Budapest. Prestige Hotel. (B)

Departing Budapest, drive to Bratislava, capital of Slovakia and begin a tour including the Mausoleum of Rabbi Chatam Sofer, the former Ghetto with the Wall of Memories, and the Heydukova Street Synagogue. Continue to Vienna, famed for its world-class music, art, and blend of baroque and contemporary architecture. Later, drive along the Ringstrasse, one of the most beautiful boulevards in the world, past the State Opera, Museum of Applied Arts, and stop at the Hofburg Palace. Continue via the City Hall and  Musikverein to your hotel in the heart of the city. Intercontinental / Marriott Hotel. (B)

The Jewish tour of Vienna begins at the controversial Monument Against War and Fascism. Continue to the official Holocaust Memorial at Judenplatz, in the center of Vienna Old Town. This vast square features a touching Holocaust Memorial; several Jewish organizations have returned to the surrounding buildings. Along narrow quaint streets, see Vienna’s landmark, St. Stephen’s, before arriving at the Wiesenthal Center, dedicated to the research and documentation of all aspects of antisemitism. Next, visit the Stadttempel, Vienna’s main synagogue, and the Morzinplatz, former home to the Gestapo headquarters. Names like Freud, Mahler, Schoenberg, Buber, and Zweig will forever be associated with Vienna’s prominence. In the afternoon, Visit the imposing Schonbrunn Palace and its surrounding Gardens. Schonbrunn, Summer Residence of the Hapsburg Dynasty, is now listed as a UNESCO World Heritage Site. Check-in at the hotel in the late afternoon. Intercontinental / Marriott Hotel. (B)

Enjoy a full day to explore Vienna on your own, or join an optional (included) tour to often overlooked Holocaust sites. First, visit the Hartheim Castle, one of six sites that were chose for the Nazi euthanasia program known as T4. The intention was to get rid of the physically or mentally disabled, incurably ill or emotional distraught people, including children. After arriving at the castle, these lives ended in the gas chamber on the very same day. Next, pay respects at Mauthausen Concentration Camp, one of the largest hard labor camps, and notorious for the cruelty and inhuman conditions. The visit will include the quarry known as the “Stairs of Death,” as well as the prisoner’s barracks. Return to Vienna in the late afternoon, with time to reflect on the unbelievable evil that was a source of the Nazi plans. Never Again! Intercontinental / Marriott Hotel. (B)

Drive to the former Jewish Homelands along the Austrian and Czech Republic border known as Moravia. Visit Mikulov (known in Yiddish as “Nikolshburg”), still the hub of Czech wine production, including a Kosher winery. Its heritage boasts the legendary scholar, Rabbi Loew — also known as “the Maharal” — who lived here for two decades, composing philosophical and religious treatises. Next, visit the synagogue and well-maintained cemetery, which is one of the largest in the Czech Republic. Continue to Třebíč, (only Jewish site on UNESCO Heritage list outside of Israel). The ensemble of the Jewish Quarter, the old Jewish cemetery, and the Basilica of St Procopius in Třebíč combine as reminders of the co-existence of Jewish and Christian cultures. After the tour, check-in at the historic hotel, situated in the Ghetto. The buildings of the hotel were formerly Jewish homes and the community Mikve. Joseph 1699 Hotel. (B)

After a quiet morning in Třebíč, depart for Terezin (Theresienstadt). This former fortress was transformed to a notorious “model” concentration camp. Tour the barracks, the Ghetto Museum, which contains art and poetry created by imprisoned Jewish children; later, visit the Magdeburg Barracks. In the afternoon, continue to Prague, and check-in at the hotel, centrally situated in the famous Old Town, and minutes from the Old Town Square, Charles Bridge and the Wenceslas Square and Josefhof (Jewish Historic Quarter), home to such Jewish literary luminaries as Franz Kafka. Remainder of day at leisure. Art Nouveau Palace Hotel. (B)

Today features a tour in the uniquely-preserved Jewish Quarter, which survived due to the Nazi’s intention of making Prague a museum of the “Vanished Jewish Race.” This area is actually an unmissable sight for tourists of all religions. Stroll the streets and visit the Maisel, Spanish, Pinkas, and Klaus Synagogues, and the oldest existing synagogue still offering services, the Old-New (“Alt-Neu”) Synagogue. Prague’s Jewish Museum uses these synagogues as exhibits, boasting one of the world’s greatest Judaica collections. Visit the 15th century cemetery, burial place for many of Prague’s famous Jews, including Rabbi Loew. In the afternoon, visit the New Jewish Cemetery, where personalities such as Franz Kafka and several other famous members of the prominent Jewish community are laid to rest. Return to the hotel in the late afternoon.  Art Nouveau Palace Hotel. (B)

Enjoy a full day at leisure, or join an optional tour. First, visit the Saints Cyril and Methodius Cathedral, where brave heroes hid after having assassinated Reinhard Heydrich in 1942, eventually committing suicide following a fierce battle with German troops. Then, cross the historic Charles Bridge, and walk via the Lesser Town to Prague Castle, situated on top of Hradcany Hill on the West Bank of the Vlatala River. Visit the imposing Castle, now the official residence of the President of the Czech Republic, as well as several government offices. See the stunning St. Vitus Cathedral, before returning to Old Town. Afternoon is at leisure to enjoy the colorful streets of Prague. Art Nouveau Palace Hotel. (B)

Transfer to the Prague Airport for your flights back to the USA/Canada. (B)