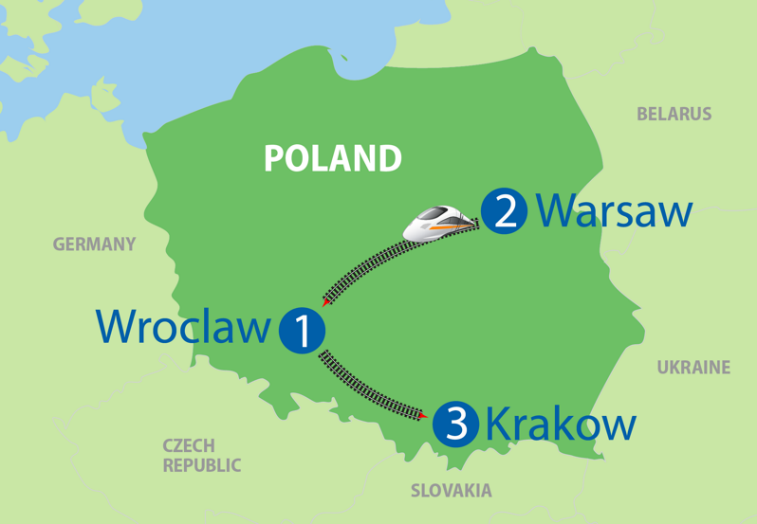 Situated in the heart of Europe Poland is known for its rich cultural and historical heritage.  Bordered by the Baltic Sea, Germany, Czech Republic, Slovakia, Ukraine, Belarus, Lithuania and Kaliningrad (Russia), it is a country of great diversity and culture. This 7day tour begins in the capital city of Warsaw painstakingly rebuilt brick by brick after WW 2. Our two nights in Warsaw includes a hop on hop off bus tour to see its popular landmarks. A train ride takes you to Wroclaw near the border with Germany includes a private walking tour. A morning a train ride to Krakow for our last 3 nights. Sitting proudly on the Vistula River, Krakow is one of the oldest cities in Poland.  A hop on hop off bus tour allows us to see sites affiliated with its tumultuous history. The last day is free to discover on our own or take an optional tour to  the Wieliczka Salt Mine or the Auschwitz-Birkenau Memorial and Museum. Noteworthy amongst Poland’s famous personalities are Pope John Paul II, Madame Marie Curie, Fryderyk Chopin and Nicolaus Copernicus.

7 day independent journey by train. All departures are guaranteed! Travel any day! Children under the age of 8 cannot join the tour.

Your land tour does not include

Airfare to Warsaw and back from Krakow
Departure taxes, fuel surcharges and airport improvement fees
Porterage at airports and hotels
Transfers between railway stations and hotels as indicated in red
Meals and beverages not mentioned
Early check in/late checkout
Optional tours
Entrance fees for hop-on/hop-off tours in Warsaw and Krakow not included
Insurance though not included is strongly recommended
Gratuities of a purely personal nature such as laundry and valet service
Tipping to guide, driver and hotel staff
E. & O.E.

THIS VACATION CAN BE COMBINED WITH:

Our Escorted tour “Capitals of the Habsburg Empire”- (this tour starts in Prague and the transfer from Krakow to Prague will be provided complimentary).

Upon arrival in Warsaw at the Warsaw Chopin Airport, you will be met and transferred to your hotel. The afternoon is free to explore Warsaw on your own.

Discover Warsaw, the capital of Poland on the Vistula River was totally destroyed by the Germans, but rose from the ruins of WWII like a phoenix from its ashes. Today Warsaw is a vibrant metropolis. A convenient hop-on hop-off bus tour will take you to see such attractions as the Royal Castle serving as the official royal residence. Located at the entrance to the Old Town in Castle Square, the castle of more than 300 rooms was restored to their original state prior to the war. In 1980 together with the Old Town, they were registered as a protected UNESCO World Heritage Site. Abbreviated as MNW, the National Museum in Warsaw is one of the largest museums of Poland. Housing a magnificent collection in excess of 830,000 pieces from all eras both Polish and world art.
The extraordinary collection of Nubian artefacts in Europe from the 8th – 14th centuries can be found in the Faras Gallery. After the war, a five-year meticulous reconstruction of the UNESCO World Heritage Old Town with its churches, palaces and market-place took place. (B)

Day 3 from Warsaw to Wroclaw

Today we take the train from Warsaw to Wroclaw near the border with Germany on the River Oder. Train tickets are included, but transfers between the railway stations and the hotels are on your own. In Wroclaw there is a private walking tour that includes such sights as its 13th century Market Square, the oldest mediaeval public square in Poland and possibly one of its largest featuring the Old Town Hall considered to be a fine example of bourgeois Gothic architecture. Nowadays the Old Town Hall is open to visitors as the Museum of Bourgeois Art and is a venue for temporary exhibitions and cultural events. The University of Wroclaw is amongst the oldest and most prestigious universities of Poland. The Cathedral of John the Baptist with its 21 chapels is a landmark of the city was destroyed many times, but was rebuilt in 1951. Visitors can admire the precious statues and paintings inside. (B)

Day 4 from Wroclaw to Krakow

A train brings you from Wroclaw to Krakow. Train tickets are included, but transfers between the railway stations and the hotels are on your own. Krakow, one of the oldest cities in Poland is situated on the Vistula River. Being one of the most beautiful cities in Europe, the city dates back to the 7th century. Its Old Town was declared the first UNESCO World Heritage Site in the world. (B)

Discover the historic city of Krakow with a hop-on and hop-off tour. Explore the city at your own pace and see top attractions like the majestic Wavel Castle, the jewel of the city sitting on a picturesque hill. Consisting of various structures from different eras, the castle is one of the largest in Poland. Next is Schindler’s Factory where you can visit his preserved office and learn about his heroism. The factory known as the Deutsche Emaillewarren-Fabrik produced products for consumer and military purposes. Between 1939 and 1945, Oskar Schindler hired approximately 1100 Jews to work in his factory thereby saving them from extermination. Our last stop is the Jewish District known as Kazimierz, a small district of the city adjoining the historic center. Most buildings were destroyed by the Nazis, only some remain. Religious buildings were gradually renovated. The movie, “Schindler’s List” was filmed in Kazimierz where you will find Market Square called Jewish Square and the Old Synagogue probably the oldest in Poland dating back to 1407. Szeroka Street was the main point of the Jewish town. The Plac Bohaerow Getta (Ghetto Heroes Square) was originally called Small Market Square and was the center of the Jewish Ghetto. Today known as Zgody Square there is a monument to the Victims of the Ghetto sits in the centre. There are 33 oversized cast iron and bronze chairs scattered through the square, each symbolizing a thousand lives. (B)

Today is at leisure. (B)

Perhaps an optional tour to the Wieliczka Salt Mine or to the Auschwitz-Birkenau Memorial and Museum. (B)

Located very close to Krakow, the Wieliczka Salt Mine is one of the oldest operating salt mines in the world. You will have an opportunity to wander through the labryinthe of passages gazing at an underground lake and chapels and viewing view elaborately carved statues from rock salt. There are more than 2,000 chambers in the mine, with no two alike. The most impressive chapel is the Chapel of St. Kinga, patron saviour and 13th century Hungarian princess who wedded a Polish prince who carried salt as part of her dowry. Even more impressive than the depictions of Princess Kinga is the lavish chandeliers made from salt.

Fifty Kms. west of Krakow is the city of Osciewim, the site of the nortorious Auschwitz-Birkenau concentration camp. Designated a World Heritage Site in 1979, there are no words to describe this place. It is a part of history where unspeakable actions were carried out. Opened in 1940, it was the largest of the Nazi concentration camps. Located on a former military base outside Oswiecim approx. 40 miles west of Krakow. Auschwitz-Birkenau was located near the Polish village of Brzezinka (German Birkenau) about two miles from the main camp. Soviet troops entered the Auschwitz camp on Jan. 27, 1945.

Your independent journey ends today. You will be transferred to Krakow airport for departure. B