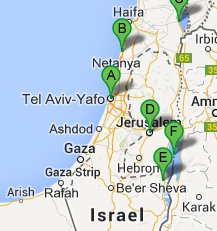 This 8 day program is a perfect introduction to Israel, a land where the past and present merge side by side. Spend 1 night in Tel Aviv, 1 night in Tiberias and 5 nights in Jerusalem,

Explore unforgettable sights, celebrate Shabbat in the Holy City of Jerusalem and rediscover your Jewish heritage. This itinerary is recommended for wheelchair and scooter users, slow walkers, visually and hard of hearing travelers.

*6 days of touring as per the itinerary

(based on accessible accommodation for wheelchair and scooter users)

*meals and beverages not specified

*services of ASL interpreter not included (available at additional cost)

*gratuities for individual services such as laundry, valet service or any other items of a personal nature

On arrival at Ben Gurion International Airport, your driver will be waiting to take you for a drive through Tel Aviv and Jaffa before arriving at your hotel in time for check in.

We begin at the Roman port city of Caesarea located on the Mediterranean. An audio-visual presentation brings to life the times of the Roman Legion who controlled these shores several thousand years ago.

In Zichron Ya’akov visit Ramat Hanadiv continue north to Tiberias, a popular destination for tourists for more than 2,000 years welcoming visitors from every part of the ancient world.

After checking out of our hotel take part in a special Tree Planting Ceremony. Feel your connection with the land of Israel by planting a tree in Israeli soil with your own hands. After lunch (not included) visit Mini Israel, a miniature park located near Latrun opened in 2002.

The collection contains miniature replicas of some 350 beautifully crafted exact-replica models of historical, religious, archaeological and modern sites on a 1:25 scale. Upon arrival in the Holy City of Jerusalem participate in the traditional “Shechiyanu” and “Borei Pri Hagefen” blessings the same as pilgrims did throughout history when approaching Jerusalem.

Stroll through the Jewish Quarter to the Cardo, known as Cardo Maximus, lined on both sides with columns serving as the main thoroughfare of Byzantine Jerusalem. See the excavations of the Herodian Mansions and discover how wealthy Jerusalemites lived 2,000 years ago.

Tour the Southern Wall Excavations and stop at the Davidson Center’s for a 10 minute 3D virtual tour of the Western Wall. Tour the Kotel Tunnels, one of the most incredible places in Jerusalem showing the Western Wall and the Holy Temple as they were in Roman Times until the destruction of the temple in the year 70 CE.

NOTE: It is time to prepare for Shabbat with candle lighting at the hotel and to celebrate Kabbalat Shabbat followed by Shabbat dinner at the hotel.

Breakfast at the hotel at your leisure. Attend Shabbat services at one of the nearby synagogues. This afternoon there is a choice of a walking tour (on your own) either to the Western Wall or through some of Jerusalem’s beautiful neighborhoods located near the hotel. This evening enjoy Jerusalem as she comes back to life after a rest on Shabbat.

This morning we leave Jerusalem for the Judean Desert and start the day at Masada, the isolated mountaintop fortress of King Herod and scene of the Jewish zealots last stand against the Roman Legion where they chose to commit suicide rather than be enslaved. Enjoy lunch and a swim at a Dead Sea Hotel with time to float in the unsinkable waters.

We end the day at Eretz Bereshit also known as Genesis Land which recreates the way of life during the time of the Patriarch Abraham. You will be met by Abraham’s servant Eliezer. Experience a camel ride and enjoy the hospitality of Abraham who invites you to his tent for food and drink. Return to Jerusalem.

Our day begins with a somber visit to Yad Vashem remembering the darkest moment in Jewish history. See the unique and moving Children’s Memorial hollowed out from an underground cavern which pays tribute to the 1.5 million murdered Jewish children whose names, ages and countries of origin can be heard in the background. Also see the Garden of the Righteous honoring non-Jews known as the Righteous among Nations who risked their lives to save Jews. Afterwards experience Israel’s newest attraction known as “Herzl’s Vision” where you will learn the story of Theodore Herzl whose vision of a Jewish Homeland was only a ‘dream’.

Next is the Israel Museum, Israel’s national museum situated in the Givat Ram neighborhood of Jerusalem housing the famous Dead Sea Scrolls discovered in Qumran in 1947. The unique white dome recreating the lids of the jars in which the first scrolls were found. Nearby is the Model of Jerusalem from the late Second Temple period where this 50:1 scale model meticulously recreates the year of 66 CE in which the Great Revolt against the Romans took place. After dinner enjoy a 45 minutes spectacular Sound and Light Show at the Tower of David Citadel where moving images from 20 projectors tells a pictorial tale of the history of Jerusalem.

After breakfast we will drive around to see the new city of Jerusalem which includes the Knesset, the site of the Israeli parliament with its surrounding Wohl Rose Gardens with over 15,000 rose shrubs and over 400 different species of roses. Next is Ammunition Hill where one of the fiercest battles for Jerusalem took place during the Six Day War.

Spend the balance of the afternoon doing last minute shopping, packing and relaxing. Relax and enjoy a farewell dinner at restaurant in Jerusalem before being transferred to Ben Gurion Airport for your return flight home.