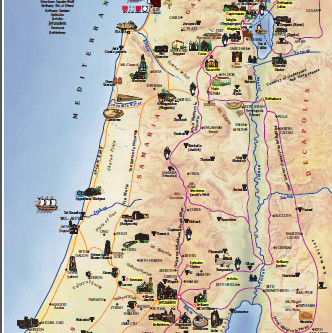 This 10 day multi-denominational program has been specially created for travelers with a variety of mobility issues including wheelchair and scooter users, walkers, canes as well as senior travelers, who just cannot move as quickly as they once did. It allows participants to experience the people, the places and the history of  amazing country.

Everything comes alive as we follow the ancient pathways and the layers of history unfold before us. See the many faces of Israel with the personal touch of Eli Meiri.  This is the perfect program for those interested in both cultures (Jewish and Christian).

Arrival in Tel Aviv Ben Gurion Airport. After you have cleared Passport Control, your guide Mr. Eli Meiri will be waiting holding a sign with your name on it. He will escort you to your waiting transportation.

*Depending upon the arrival time of your flight you will either be transferred directly to your hotel or continue on a half day sightseeing tour of Jaffa, one of the oldest ports in Israel in existence upward of 4,000 year. It was from Jaffa that Jonah set out before being swallowed by the whale and it as here that Solomon imported the cedars of Lebanon for the construction of the first temple in Jerusalem.

Breakfast at the hotel. We begin the day with an introduction to Israel followed by a special visit to Independence Hall, the site of David Ben Gurion’s monumental proclamation of the State of Israel in December of 1948.

We will stroll down Rothschild Boulevard, Tel Aviv’s Bauhaus architecture district that is recognized as a UNESCO World Heritage Site which gave Tel Aviv its other name, the “White City”. Next we visit Neve Tzedek, the first neighbourhood built in the “new” city of Tel Aviv in 1887. At the beginning of the 20th century Neve Tzedek was home to many artists and writers such as Brenner and Agnon, a Nobel Peace Prize winning author.

Enjoy an evening seaside walk at the at the Tel Aviv Port with its galleries, restaurants and coffee shops.

Dinner at the hotel.

After breakfast we leave Tel Aviv and drive up the coast to Caesarea National Park where 2,000 years ago, King Herod built a large port in honour of Emperor Augustus. Pontius Pilate later ruled the country from Caesarea and it was from here that Paul set sail to the communities where he preached all over the Mediterranean. We stop to visit the Roman Theater, Herod’s Palace, the walled Crusader town with its galleries, restaurants and Caesarea’s latest attraction – the Time Trek, a fascinating multi-media presentation that will take you through a journey of the history of Caesarea.

Driving north via the Carmel Mountains we come to Haifa and continue through the Lower Galilee to the Sea of Galilee stopping at the Yigal Alon Museum  located on the grounds of Kibbutz Ginnosar showcasing the history of the Galilee from ancient days to the present. The museum also hosts changing exhibits which showcase the finest talents of Galilean artists from a variety of faiths and ethnic backgrounds. The museum also houses the famous Galilee Boat dating from the time of Jesus which was discovered mired in the mud on the shore of the Sea of Galilee.

After dinner participate in “A Kibbutz Experience” where you will have a chance to meet a Kibbutz member and learn about the Kibbutz way of life.

Today we visit the north-western shore of the Sea of Galilee also known as the Kinneret with its many landmarks.

TABGHA – The site of the miracle of the Fish and Loaves illustrated beautifully in an ancient mosaic found in the Byzantine church that stood here. Visit the renovated Benedictine Church which was built in the same style as the original church.

CAPERNAUM – Known as “Jesus Town” in the New Testament. Capernaum, on the Sea of Galilee was home to one of the earliest churches in the world as well as a monumental ancient synagogue. This was also the home of Peter and where Jesus performed many miracles.

Ascending the strategic Golan Heights we visit the capital city of Katsrin with the opportunity of mingling with the locals over falafel or pizza. We still also stop at one of the Golan wineries for wine tasting.

Following breakfast we leave Tiberias and continue south to Beit She’an National Park. Being one of the main pagan towns during the Roman rule of the region some 2,000 years ago as well as in the shadow of an important Biblical City, Beit She’an contains a magnificent theater, Roman bathhouses, mosaics and more. It is also considered to be one of the best preserved Roman sites in the region.

Driving via the Jordan Valley we come to Holy City of Jerusalem. As we approach Jerusalem in the afternoon, a stop will be made at the Mount of Olives Observation Point for a dramatic view and spiritual introduction to the city, both ancient and new. View the Temple Mount, the City of David, the Church of the Holy Sepulchre and more as the vista spams the length and breadth of the city.

On arrival proceed to your hotel for dinner and overnight.

Breakfast at the hotel. For those wishing to attend Shabbat service may do so at one of the nearby synagogues. Afterwards a walking tour in the Archaeological Park near the hotel.

This evening enjoy Jerusalem as the city comes back to life after a rest on the Sabbath.

Attend a “Night Spectacular” at the Tower of David. A show without words, just sounds and light cast along the walls of the Citadel telling the 4,000 year old history of Jerusalem.

Sitting amongst the ruins of this old courtyard by the Jaffa Gate, the virtual reality images tell of King David, the Roman conquest, Muhammed, the Crusaders and Suleiman the Magnificent amongst others. This 45 minute show uses trompe l’oeil technology, the stones of the walls and structures fade into the scenes and the screened images envelop the viewers whisking them off to a one of a kind multi-sensory experience.

We will have dinner by the Ben Yehuda Pedestrian Mall.

Today we discover Jerusalem’s Old City. Spend time at the Western Wall also known as the Wailing Wall, one of the last vestiges of the Second Temple complex built by Herod some 2,000 years ago and thus, the holiest spot in the world for the Jewish people. Visit the beautiful Southern Wall Archaeological Park that surrounds the lower part of the Temple Mount from west and south.

Come in the wake of pilgrims – Jewish and Christian who have visited here over the millennia as acts of faith. In the basement of an 8thcentury C.E. palace we visit the Davidson Center with ramped access and an elevator to the exhibits augmented by an audio-visual presentation. Enjoy the real time virtual reality reconstruction of the Herodian Temple Mount as it stood prior to its destruction by Roman soldiers in 70 C.E. The technology allows users to interact with the computer environment.

Excavations in Jerusalem’s Jewish Quarter, one of the four traditional quarters of the old city have revealed a wealth of finds dating form the First and Second Temple periods. See the sites and enjoy the special ambience of this renewed part of the Old City along a wheelchair accessible route developed by the Jewish Quarter’s Center for Tourists with Disabilities. Continue to the Holy Sepulchre or Sacred Tomb, in Arabic known as “Al-Qeyamah” which means the Resurrection. It is no doubt the most important shrine in the Christian World. On the grounds of the Holy Sepulchre it is believed that Jesus Christ was crucified, buried and rose form the dead.

Extending west and southwest of the Old City is the New City which has developed tremendously since the 19th century. The New City is the site of several educational institutions as well as the Knesset (Israeli Parliament) and other government buildings including the striking Supreme Court Building which opened in 1992. Next is Yad Vashem, the moving Holocaust Memorial where you will tour the astounding New Museum with its new and moving focus on the individual in the Holocaust, the Children’s Memorial and the Hall of Remembrance.

Since we are going to Masada and the Dead Sea today, please remember to pack your bathing suit, water shoes, sun screen and take a towel. Don’t forget to wear comfortable walking shoes.

Departing Jerusalem we head for the Judean Desert starting the day at Masada, King Herod’s isolated mountaintop fortress-palace and site of the zealot’s last stand against the Roman Legion. It is here that over 980 rebels chose to commit mass suicide rather than be enslaved by the Romans. We will stop at one of the Dead Sea hotels with time to float in the unsinkable waters of the Dead Sea recognized as having therapeutic qualities.

Return to Jerusalem for dinner and overnight.

Our tour today begins at the Israel Museum founded in 1965 as Israel’s national museum. The Shrine of the Book houses the famous Dead Sea Scrolls discovered in 1948 – 56 scrolls were hidden in 11 caves near Qumran.       The building consists of a white dome symbolizing the lids of the jars in which the scrolls were found.

Visit to the Dead Sea Scrolls is partially wheelchair accessible. Adjacent to the Shrine is the Model of Jerusalem in the Second Temple period originally constructed on the grounds of Jerusalem’s Holyland Hotel. There is an audio visual presentation about life in the tumultuous days of the Second Temple.

Later transfer to the airport for your flight home.