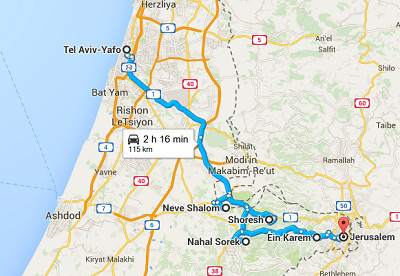 Experience a different Israel away from the tourist sites on this guaranteed guided walking tour to Jerusalem. Walk through rolling hills and rugged canyons witnessing UNESCO sites along the way.

Meet and assist at airport upon arrival

Shared transfer to your hotel in Tel Aviv – Jaffa

Transferring participants luggage every morning to the next hotel so one can walk freely without carrying a heavy back pack 6 days service of an English speaking guide who will walk with the group and guide on the history, archaeology, fauna and flora of the area along and around the trails being walked. Our guide will also have a first aid kit and cell phone connectivity 24/7 to our headquarters

OUR LAND TOUR DOES NOT INCLUDE:

Airfare to and from Tel Aviv

Insurance which can be purchased from Aufgang Travel

Meals (lunches on route) plus 3 dinners

Water supply (one can purchase water bottles at each overnight site)

*Departure from home city should be (1) day before the tour starts (cost not included).

*Rates quoted are US $ per person land rates based on double occupancy.

3 STAR HOTELS/GUESTHOUSES ALONG THE TRAIL

Each tour requires a minimum of 8 passengers. If minimum numbers are not reached, all passengers who have booked will be notified 60 days prior to arrival that the tour is not operating and will be offered an alternative date or reimbursement of the full amount for those who want to cancel.

Closed (private) groups of 8 passengers and more can be arranged selecting their own private departure date.

You will be met on arrival at the airport and transferred to the 63 room Ruth Daniel Hotel Jaffa, adjacent to the old city, the flea market and Jaffa’s colorful port. Once we have checked in, it’s time for dinner and overnight – Tel Aviv (Jaffa)

Our day starts with a short walking tour of Old Jaffa, the 5000 year old historic part of Tel Aviv where we see the artist colony, the House of Simon the Tanner, the beautiful St. Peter Church and the old port dating from Biblical times. Afterwards transfer to Moshav (Village) Karmei Yossef located between Ramle and Rehovot, where we will start our walk.

Our “Walking to Jerusalem” hiking tour begins in the Valley of Ayalon, an important axis on the way to Jerusalem for generations and location of many bloody battles fought between invaders and their victims throughout history. Go back 5,000 years to the time of the ancient Kingdom of Israel and the Middle Bronze Age at Tel Gezer National Park where we ascend the peak of Gezer Hill for a picnic lunch or grab a snack while wading in the small fresh cool waters of Ein Vered spring. Discover the elegant architecture of the Latrun Monastery also known as the Monastery of Silence. Visit the large church with its unique stained glass geometric patterned windows, the “Garden of Brotherhood” with its large inscripted wooden carving, the winery and gift shop where you can purchase a bottle of wine or olive oil harvested from the adjacent groves.

It’s time to begin our hike to Neve Shalom, an intentional community village serving as a model of co-existence established by Jewish and Palestinian Arab citizens of Israel in the Judean Mountains. Dinner and overnight at the Nave Shalom Guest House (41 garden style units) Neve Shalom | 6-7 hours (16 km/10 miles)

After breakfast, the third day of our journey will lead us to discover the story of triumph and determination of this young country by walking through the main part of the Israeli Burma Road. Inspired by the historical road from Burma (today known as the Republic of Myanmar) to China during the second Sino-Japanese War, the Israeli Burma Road was built in the Judean mountains as an alternative route for freeing Jerusalem and breaching the siege which blocked the supply convoys way from the center of the country to the Jewish population in the Capital. As you walk along the trail, signposts, soldiers’ images, armored vehicles, memorials and explanatory signs bear witness to a living war memorial reliving the courageous battles that took place during the building of this road by Israeli forces under incredibly difficult circumstances during the 1948 Israeli War of Independence.

We pause at the observation points dotted along the road to marvel at the magnificent forest and the breathtaking views of the Judean lowland. On a clear day you can see the Mediterranean Sea. Overnight at the Green Hills Hotel, Shoresh, 6-7 hours | (15.5 km/10 miles) Free evening with dinner on your own at one of the restaurants in the village.

Set out on foot from the Shoresh “Green Hill” Hotel to the departure point located just beyond the roundabout. Your hike begins on a trail that leads through the Martyrs’ Forest planted in 1951 on both banks of the Kisalon River commemorating the Victims of the Holocaust where 600 meters above sea level, six million trees were planted as a living  in memory of the Six Million Jews who during World War II. In the middle of the forest, a large 8.5 m bronze monument wrought by sculptor Nathan Rapaport. Shaped like a double Torah scroll – one scroll depicts the destruction of the nation and the other depicts its rebirth. Between the trees of the forest on the southern bank of the Nahal Sorek is Martyr’s Cave which serves as a place of communing with the memory of the Victims of the Holocaust.

In the Anne Frank Memorial Party in Martyr’s Forest, a “Story of a Girl and a Tree” monumental memorial has been created. A very large cube was built to recreate the view that Anne saw of a large chestnut tree from the window of her family’s hideout. The enchanted forested trail and its beautiful landscape lead up to the picturesque Arabic village Ein Rafa founded in the 1940’s just 10 kms. West of Jerusalem. Continue to the 64 room Kibbutz Tzuba where you will spend the fourth night of your self-hiking tour learning about the unique Kibbutz way of life founded in Israel during its early days based on the principles of equality and cooperation. Dinner and Overnight, Kibbutz Tzuba | 8-7 hours (19km/12 miles)

Today’s fantastic route combines easy walking mostly through shady forest and beautiful hilltop scenery dotted with several interesting sites. Our trail passes Tel Tzuba, an ancient Jewish town during the time of King David in the “Sataf” National Park. See the Franciscan Monastery of St. John in the Wilderness built south of Jerusalem on a wooded slope celebrating the childhood wanderings of John the Baptist as well as the adjacent Ein Hindak spring. We finally arrive in Ein Karem, one of Jerusalem’s most picturesque neighborhoods nestled in a magical green valley of forest and natural groves at the foot of Mount Ora, which despite time and modernization, has managed to retain its special ambience.

The neighborhood considered a pilgrimage site is the home of Mary’s Fountain, where according to Christian tradition, the Virgin Mary stopped to drink from the waters; the Franciscan Church of the Visitation on a hillside facing the south side of the village named after the Virgin Mary’s visit to the summer house of the parents of John the Baptist and the Russian Orthodox Gorny Church or “Moscovia” Monastery, a convent for nuns during the 19th century with its beautiful golden domes dominating the landscape. According to Christian tradition, Ein Karem was the place where Elizabeth miraculously became pregnant and gave birth to John the Baptist.

Walk around the neighborhood’s charming ancient narrow passageways, cobbled streets and stone-built houses adorned with arches. Visit the impressive churches and listen to their bells chime. Indulge yourself with a nice cup of coffee, a refreshing ice cream or a good meal or perhaps buy a cherished souvenir in one of the tempting gift shops and galleries.

We will spend the fifth night of our self-guided tour at the charming “Sisters of Notre Dame De Zion” Guesthouse.  Free evening followed by dinner on your own at one of the many restaurants in the village. Ein Karem | 4-5 hours (12 km/7.5 miles)

Setting out on a morning hike we pass through the upper part of the Nahal Sorek (Sorek stream) which is 70 km long starting north of Jerusalem and flowing all the way to the Mediterranean Sea.

The Sorek stream is the central axis of the Jerusalem National Park which   is the largest urban park in Israel and includes bicycle paths and 25 km. of paved walking trails which we will partly walk today. Stop by the ancient winery and the Yvel Jewelry Factory in Lower Motza, learn about the area from the signed rocks surrounding the Telem Spring and visit the September 11 Memorial on the outskirts of Jerusalem designed by sculptor Eliezer Weishoff in memory of the victims of the Twin Towers in New York city. The names of the 2,779 victims of the terrorist attack are inscribed on the walls surrounding the plaza.” Continue to the picturesque abandoned Arabic village of Lifta on the outskirts of Jerusalem which was known for its artistic embroidery. Dinner and overnight in Jerusalem at the Jerusalem Tower Hotel  4-5 hours (12km/7.5 miles)

Breakfast then a full day walking tour with our guide in the old city of Jerusalem (near our hotel).Walk along the Jaffa Road to Mamilla Boulevard which leads to the Jaffa gate. Enter the old city gates and view the great Citadel known as the “Tower of David”. Walk on top of the city ramparts towards the Zion Gate and enjoy the unique views from this high vantage point. Visit the Jewish Quarter and see the great Cardo, the main street of Jerusalem some 1500 years ago, the Hezekiah Broad Wall that Hezekiah built in preparation for Judah’s rebellion against Assyrian and more.

Reach Mount Zion and visit the Room of the Last Supper also known as the Cenacle. On the main floor is King David Tomb. Dormition Abbey located on Mount Zion marks the site where the Virgin Mary is said to have died or fallen into an eternal sleep.

Heading downhill to the Valley of Kidron we visit the Garden of Gethsemane with its beautiful ancient olive trees and the magnificent Church of Agony at the foot of the Mount of Olives built by funds from 12 different countries which gave it its nickname of Church of All Nations. View the beautiful great ancient tombstones of Absalom and Zachariah the high priest.

Changing direction we walk uphill to Dung Gate and re-enter the Old City to see the Western Wall, the Temple Mount and the most famous Islamic site in Jerusalem, the Dome of the Rock. Continue via the great Arab Market to see the Pools of Bethesda and the Church of St. Anne. A walk along the ancient Via Dolorosa (Way of Grief) brings us to the Church of the Holy Sepulchre and the Tomb of Jesus. Walk back to the Jaffa Gate and return to our hotel.  Free evening, dinner is on your own.

Optional activity: Visit the Tower of David Museum housing remnants of King Herod’s Palace and have dinner at one of the tasty Middle Eastern restaurants near the Jaffa Gate. After dinner enjoy the “Sound and Light” show at the Citadel (after sunset)

This morning our 74.4 km. (46 mile) self-hiking “Walking to Jerusalem” tour ends. After breakfast, check out of hotel then transfer to Ben-Gurion Airport for your flight home.

**The above itinerary is subject to revision and weather conditions.